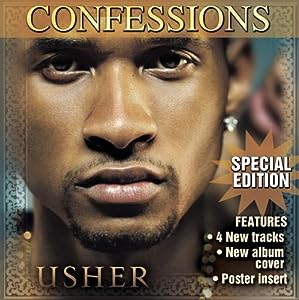 $2.73
As of 2023-02-03 17:04:33 UTC (more info)
Not Available - stock arriving soon
Buy Now from Amazon
Product prices and availability are accurate as of 2023-02-03 17:04:33 UTC and are subject to change. Any price and availability information displayed on http://www.amazon.com/ at the time of purchase will apply to the purchase of this product.
See All Product Reviews

Includes four new tracks including the "My Boo" duet with Alicia Keys!

A CD is always more compelling when you know it's lifted from the artist's autobiography, and that's certainly the case with Confession, Usher's first record since 2001's 8701. The Atlanta singer's string of hits over the past decade have been decidedly PG-13 rated, almost veering towards teen pop, but he's changed all that on this co-produced offering, which he claims is "the real him." It would be too simplistic to just brand this record a break-up record, chronicling his public split with TLC's Rozonda "Chili" Thomas; it is that, but so much more. It would be more accurate to call this Usher's coming of age record, bridging the gap from boy to man, as he navigates the emotional fallout from the disintegration of his relationship, and the events that led up to it--real or imagined. But other than a guilty conscience, it seems unclear why Usher feels compelled to disgorge his secret life, as he documents his infidelities, transgressions, and emotional perfidy in the album's prodigious twenty one songs, that range from insinuating sultry R&B grooves to the decidedly crunky "Yeah," which pairs an insistent keyboard romp with Lil' Jon's assertive beats, and Ludacris' rather humid rhymes. --Jaan Uhelszki