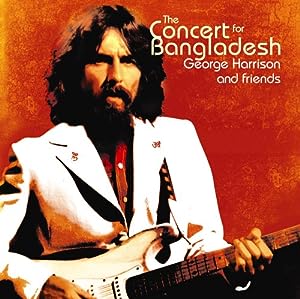 $74.95
As of 2021-04-15 12:08:51 UTC (more info)
Not Available - stock arriving soon
Buy Now from Amazon
Product prices and availability are accurate as of 2021-04-15 12:08:51 UTC and are subject to change. Any price and availability information displayed on http://www.amazon.com/ at the time of purchase will apply to the purchase of this product.
See All Product Reviews

Ravi Shankar planted the seed, but it was George Harrison who turned this historic benefit concert into reality. The publicity-shy former Beatle could've easily written a check and forgotten all about the matter--impoverished East Pakistani refugees stranded in India--but instead recruited some of his most talented and compassionate friends and created an event remembered as much for the quality of its music as the purity of its intent. (The two-part engagement itself raised $250,000.) The players include Eric Clapton, Ringo Starr, Billy Preston, Leon Russell, and Bob Dylan, while the backing band includes Jim Keltner, Klaus Voormann, and the up-and-coming Apple band Badfinger (Phil Spector and Harrison produced). The concert took place on August 1, 1971 at Madison Square Garden and was released as a triple-album boxed set that December and a feature film in 1972. That year, it won the Grammy for best album. The program begins with Shankar and his trio ("Bangla Dhun") and ends with a song Harrison wrote for the occasion ("Bangla Desh"). Highlights include Billy Preston's rousing "That's the Way God Planned It" and Dylan's heartfelt five-song set, starting with "A Hard Rain's A-Gonna Fall." The remaster adds an additional Dylan track, "Love Minus Zero/No Limit," from the afternoon show. Although the cover art has been changed to a picture of Harrison, the original iconic image of a sad-eyed child remains prominent in the CD and DVD packaging. As with previous versions of The Concert for Bangladesh, all artist royalties go to UNICEF or, as Harrison notes in his band introduction, "Nobody's gettin' paid for anything." --Kathleen C. Fennessy