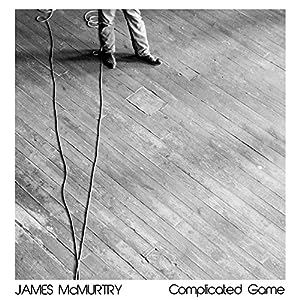 $39.99
As of 2022-01-10 13:57:22 UTC (more info)
Not Available - stock arriving soon
Buy Now from Amazon
Product prices and availability are accurate as of 2022-01-10 13:57:22 UTC and are subject to change. Any price and availability information displayed on http://www.amazon.com/ at the time of purchase will apply to the purchase of this product.
See All Product Reviews

James McMurtry spins stories with a poet's pen ('Long Island Shores') and a painter's precision ('She Loves Me'). Proof: The acclaimed songwriter's new 'Complicated Game'. McMurtry's first collection in six years spotlights a craftsman in absolutely peak form as he turns from political toward personal ('These Things I've Come to Know, You Got to Me'). 'The lyrical theme is mostly about relationships', McMurtry says. 'It's also a little about the big old world verses the poor little farmer or fisherman. I never make a conscious decision about what to write about.'

'Complicated Game', set for February 24, 2015 release on Complicated Game Records (yes, it's complicated) and produced by CC Adcock and Mike Napolitano, delivers McMurtry's trademark story songs time and again ('Copper Canteen', 'Deaver's Crossing' ). However, the record brings a new (and certainly no less energetic) sonic approach. First, recall blistering beats and gnashing guitars from his magnum opus Just Us Kids (2008). Now, unplug. 'The label head wanted more acoustic,' McMurtry explains. 'We built everything as we went so we ended up with more acoustic guitar as we went. We just played whatever sounded right for a given song, but we weren't necessarily saying this is an acoustic record.'

A Friend of a Friend

only $4.22
Not Available
View Add to Cart