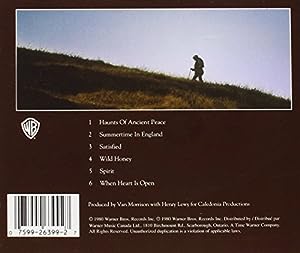 $8.28
As of 2021-09-14 02:30:41 UTC (more info)
Not Available - stock arriving soon
Buy Now from Amazon
Product prices and availability are accurate as of 2021-09-14 02:30:41 UTC and are subject to change. Any price and availability information displayed on http://www.amazon.com/ at the time of purchase will apply to the purchase of this product.
See All Product Reviews

Common One by Van Morrison

When sold by Amazon.com, this product will be manufactured on demand using CD-R recordable media. Amazon.com's standard return policy will apply.

Easily among Van Morrison's least successful albums, Common One is probably also his least understood. Arriving in the wake of the far more concise, focused Into the Music, this 1980 project found Morrison making a sweeping left turn toward the open-ended, jazz-fueled vamps and spiritual questing of his impressionistic classic, Astral Weeks, 12 years earlier. The disc contains only six songs, several woefully uneven, and fans of his tautly constructed, soul-inflected '70s work could only scratch their heads, yet the heightened horn colorations and pre-industrial imagery of the opener, "In Haunts of Ancient Peace," are a signpost to Morrison's thematic preoccupations in the decade to follow. Even more seminal is "Summertime in England," which sets sail for the "Astral" plane and stays largely on course thanks to the horn section of Mark Isham and Pee Wee Ellis, and Morrison's own hallucinatory incantation to his bardic precursors. Without these brave journeys, Morrison's soul-searching '80s trips would have sounded far different. --Sam Sutherland

only $7.11
Not Available
View Add to Cart

Time is on My Side

Pickin' Up the Pieces: The Best of Avera...