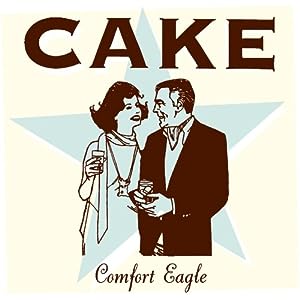 $4.99
As of 2021-07-27 22:28:48 UTC (more info)
Not Available - stock arriving soon
Buy Now from Amazon
Product prices and availability are accurate as of 2021-07-27 22:28:48 UTC and are subject to change. Any price and availability information displayed on http://www.amazon.com/ at the time of purchase will apply to the purchase of this product.
See All Product Reviews

When two-fifths of Cake defected to form Deathray after the release of their sophomore album, Fashion Nugget, some wondered if Sacramento's answer to Camper Van Beethoven would disappear into the land of one-hit wonders--especially since Cake's lone hit, "The Distance," had been penned by departing guitarist Greg Brown. But true to bandleader John McCrea's deadpan cover of Gloria Gaynor's "I Will Survive," Cake turned around and repeated their success with 1998's Prolonging the Magic and its infectious hit, "Never There." Now comes Comfort Eagle, and, with it, news of drummer Todd Roper's departure (which probably explains the addition of drum programming to McCrea's ever-expanding credits). Like Beck, McCrea's self-sufficiency is only matched by an overriding ironic sensibility. It serves him well on the title track where, above mock Middle Eastern drones, he takes on all poseurs ("Now his hat is on backwards, he can show you his tattoos / He's in the music business, he is calling you 'dude'"). By comparison, "Short Skirt/Long Jacket," a song that dates back to McCrae's coffeehouse years, sounds formulaic (which probably explains its selection as the album's first single). No matter, tracks like "Long Line of Cars" and "Meanwhile, Rick James..." are sufficiently intriguing to make up for it. Factor in the distinctive trumpet embellishments of Vincent DiFiore, the band's other original member, and Comfort Eagle seems guaranteed to ensure that, no matter what happens, Cake will survive. --Bill Forman