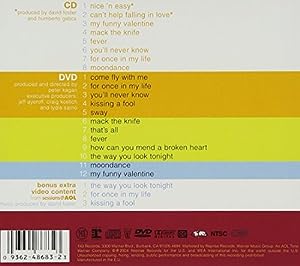 $6.75
As of 2022-07-26 00:41:54 UTC (more info)
Not Available - stock arriving soon
Buy Now from Amazon
Product prices and availability are accurate as of 2022-07-26 00:41:54 UTC and are subject to change. Any price and availability information displayed on http://www.amazon.com/ at the time of purchase will apply to the purchase of this product.
See All Product Reviews

A year after his slickly produced recording debut launched him on a meteoric course to stardom, this combo CD/DVD set chronicles Michael Buble's crowd-pleasing live performances before amphitheater-sized crowds on a triumphant national tour. The audio portion kicks off with pair of new studio recordings again reinforce the 20-something Canadian heartthrob's 1950s-something artistic tack with mixed results: "Nice 'n' Easy" has a Sinatra-faithful jazzy swing; the overproduced, somnambulistic "Can't Help Falling in Love" evokes Perry Como more than Elvis. The remainder of the audio CD is comprised mostly of live versions of songs from Buble's debut, with his takes of "My Funny Valentine," "Fever," Van Morrison's "Moondance" and "Mack the Knife" again suggesting that Buble has an ear cocked wisely towards the Bobby Darin oeuvre. But with the notable exception of three elegant live-in-studio performances culled from Sessions@AOL, the live DVD does Buble's undeniabl! y charming stage presence a great disservice. Intercut awkwardly with offstage comments by Buble and his band, the balance of that disc suffers from an MTV-inspired, cut/dissolve-every-three-seconds style that's intended to focus one's attention, but does exactly the opposite. If sudden stardom virtually guarantees that Buble's impossibly smooth, expressive voice seldom ventures very far outside the Sinatra/Darin mold here, hopefully he'll leverage that fame towards greater artistic challenges in the near future. --Jerry McCulley

only $2.27
Not Available
View Add to Cart

You've Been Watching Me