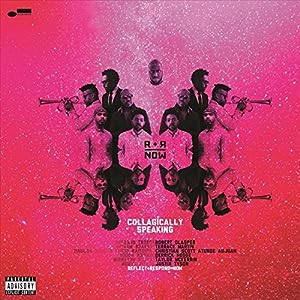 $11.10
As of 2021-07-24 11:28:54 UTC (more info)
Not Available - stock arriving soon
Buy Now from Amazon
Product prices and availability are accurate as of 2021-07-24 11:28:54 UTC and are subject to change. Any price and availability information displayed on http://www.amazon.com/ at the time of purchase will apply to the purchase of this product.
See All Product Reviews

R+R=NOW is a collective of like-minded boundary-breakers featuring Robert Glasper, Terrace Martin, Christian Scott aTunde Adjuah, Derrick Hodge, Taylor McFerrin & Justin Tyson. The “R+R” in the band’s name stands for Reflect+Respond, and was inspired by Nina Simone who said an artist's duty is to reflect the times. With Collagically Speaking the band presents an urgent musical hybrid that is distinctly of the now. As Glasper says, R+R=NOW tells “our story from our point of view… It’s a very honest, fluid sound that rings of hip-hop, EDM, jazz, at times – hell – reggae... a bunch of cats that respect each other so much that we always pass the ball.” The album features guest spots by Omari Hardwick, Terry Crews, Stalley, Amanda Seales, Amber Navran, Goapele, Jahi Sundance and Yasiin Bey.