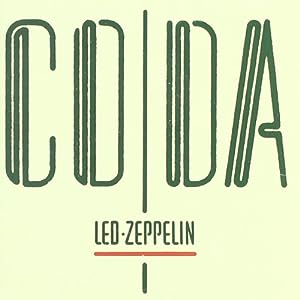 $11.98
As of 2021-10-16 07:09:29 UTC (more info)
Not Available - stock arriving soon
Buy Now from Amazon
Product prices and availability are accurate as of 2021-10-16 07:09:29 UTC and are subject to change. Any price and availability information displayed on http://www.amazon.com/ at the time of purchase will apply to the purchase of this product.
See All Product Reviews

Assembled after drummer John Bonham's death, this 1982 release featured some real nuggets for Led Zep fans drawn from throughout their career, including We're Gonna Groove; Ozone Baby; Poor Tom; I Can't Quit You Baby; Wearing and Tearing , and more.

Coda, released in 1982 after the breakup of the band, was the result of a trawl through the studio archives in search of leftover material. In fact, they had already used up almost all of the good stuff; this was Led Zeppelin's only disappointing album. Nevertheless, even relatively poor material by Led Zeppelin is decent and some tracks here are classic, notably "Poor Tom," "Ozone Baby," and "Wearing and Tearing." The latter, one of three outtakes from the In Through the Out Door sessions, features a particularly high-octane blend of stripped-down, grungy rock & roll and is considered their response to the then-burgeoning punk movement. With so little studio material available, live versions of "I Can't Quit You Babe" and "We're Gonna Groove" from 1970 flesh out the set; the former features some blistering playing. --James Swift

Defenders Of The Faith 30th Anniversary ...

You Can't Stop Me