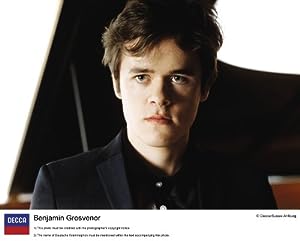 $11.50
As of 2021-06-19 19:47:34 UTC (more info)
Not Available - stock arriving soon
Buy Now from Amazon
Product prices and availability are accurate as of 2021-06-19 19:47:34 UTC and are subject to change. Any price and availability information displayed on http://www.amazon.com/ at the time of purchase will apply to the purchase of this product.
See All Product Reviews

Decca Classics is proud to present the Decca debut of 19 year old British pianist Benjamin Grosvenor, who has been described as one in a million several million (The Independent) and a keyboard visionary who knows no bounds (Süddeutsche Zeitung). Signing an exclusive contract, Benjamin became the first British pianist to sign to Decca in nearly 60 years, since Clifford Curzon and Moura Lympany first graced the label in the 1940s and 50s

The new album was released in the UK to rapturous reviews, coinciding with Benjamin Grosvenor s performance of the Liszt Piano Concerto No.2 at the First Night of the BBC Proms, where he thrilled the audience in the hall, on radio and BBCTV and again broke a record, becoming the youngest First Night soloist the Proms has ever seen. He returned later in this season s Proms to perform Britten s Piano Concerto

The album is a personal and carefully-programmed choice of virtuoso solo piano music, built around Chopin s Four Scherzi and Ravel s Gaspard de la Nuit, and including Chopin Nocturnes and shorter pieces by Liszt sequenced to trace the development of pianistic virtuosity through these three great masters

Benjamin Grosvenor first rose to prominence when he won the piano section of the BBC Young Musician of the Year 2004 at the age of just 11 the youngest ever finalist in the competition. Shortly afterwards he made his debuts at the Royal Albert Hall and Carnegie Hall, New York and has continued to develop an international presence in Europe, Asia and the USA, working with some of the world s finest orchestras and conductors including Vladimir Jurowski and Decca artist Vladimir Ashkenazy

Native American Flute for Sleep & Re...

Begin Within: A Begin with Yes Guided Me...

Beneath A Darkening Sky

Music Dogs Love: While You Are Gone