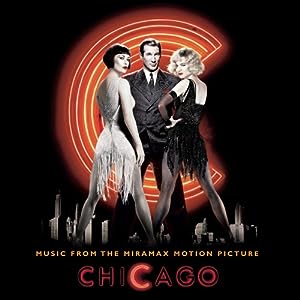 $2.92
As of 2022-06-30 02:09:49 UTC (more info)
Not Available - stock arriving soon
Buy Now from Amazon
Product prices and availability are accurate as of 2022-06-30 02:09:49 UTC and are subject to change. Any price and availability information displayed on http://www.amazon.com/ at the time of purchase will apply to the purchase of this product.
See All Product Reviews

The movie version of Kander and Ebb's Chicago was long in the making, but it's well worth the wait. Director Rob Marshall's main change was to turn the classic musical numbers into fantasy sequences, but of course this isn't obvious on CD. Most importantly, the arrangements are bursting with life while being true to the show's spirit, and the casting is simply inspired. Catherine Zeta-Jones actually started her career on the British boards (she was in The Pajama Game and 42nd Street), so her turn as slinky Velma Kelly isn't that surprising; Renée Zellweger as Roxie Hart is more of a leftfield choice, but she shows she can handle the singing demands with pizzazz. The real revelation may well be rapper Queen Latifah, who belts out "When You're Good to Mama" with a marvelous affinity for the material. OK, so the R&B reprise of "Cell Block Tango/He Had It Coming" by Queen Latifah, Macy Gray, and Lil' Kim fails to convince, while Anastacia's "Love Is a Crime" is just blah (rest easy, purists, it's over the end credits). On the other hand, the CD provides two bonuses: "Class," which was cut from the movie, and "I Move On," a great duet written by Kander and Ebb for the final cut. It's really easy to mess up film adaptations of Broadway shows. Happily, Chicago proves it can be done right. --Elisabeth Vincentelli

The Woman I Am: The Definitive Collectio...

only $8.07
Not Available
View Add to Cart

only $2.34
Not Available
View Add to Cart