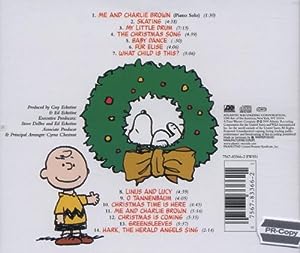 $49.99
As of 2020-09-21 18:10:05 UTC (more info)
Not Available - stock arriving soon
Buy Now from Amazon
Product prices and availability are accurate as of 2020-09-21 18:10:05 UTC and are subject to change. Any price and availability information displayed on http://www.amazon.com/ at the time of purchase will apply to the purchase of this product.
See All Product Reviews

Jazz pianist Cyrus Chestnut knows a good thing when he hears it, and the music of A Charlie Brown Christmas, set forth so eloquently by the Vince Guaraldi Trio decades ago, is one of them. The pianist is backed here by a bevy of New York's premier session players and jazz stars: drummer Steve Gadd; ace sax players Michael Brecker, Kenny Garrett, and Steve Cole; and guitarist Pat Martino. Chestnut proves as inventive as always, playing with lighthearted wit and lyrical sophistication. He captures the whimsy of such Peanuts classics as "Skating" and the winning interplay of "Linus and Lucy," delightfully mixing it up with Martino's guitar figures. Chestnut also pays fond homage to the whole Peanuts gang with his memorable opening solo, "Me and Charlie Brown." Joined by Vanessa Williams and the Boys Choir of Harlem on "Christmas Time Is Here," Chestnut and company work their understated magic on this and other traditional fare. Somewhere, Charles Schultz is nodding his head in time to these lovely tunes and updates. --Martin Keller

Andre Rieu - Christmas Around the World

Vampyre : Symphonies from the Crypt by M...