Chant Down Babylon: The Island Anthology 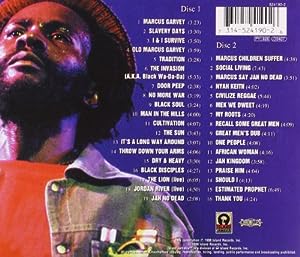 Chant Down Babylon: The Island Anthology

Import-only two CD collection that gathers together the cream of Spear's output for Island from his '70s heyday and his brief early-'90s return to the label. More than a mere musician, Burning Spear (AKA Winston Rodney) always used his musical career as a pulpit from which to sing about black culture and history, pan-Africanism, Rastafarianism, and universal love. Spear took his name from Kenyan revolutionary Jomo Kenyatta, and his greatness as an artist has consistently shone through, be it on straightforward studio songs ("Door Peep", "Dry & Heavy"), pioneering explorations of dub ("I & I Survive", "Cultivation"), or scintillating live performances ("The Lion", "Jordan River"). Spear not only wrote his own music but hand-picked his backup musicians, who have included members of the Wailers, Aswad, and a host of crack Jamaican session cats. All these factors make this an essential addition to any Reggae collection. 35 tracks.

Between 1975 and 1978, while he was on Island, Burning Spear, aka Winston Rodney, recorded his classic albums. The combination of Spear and producer Jack Ruby seem unstoppable, bringing forth heavy, spiritual reggae and some wicked dub, making him one of the most influential reggae figures of the period. Chant Down Babylon cherry-picks the best from his six records for Island, and two CDs is barely enough to contain it, with gems like "Slavery Days," "Man in the Hills," "Mek We Dweet," and "Social Living." As an introduction to the man at his very best, this can't be beat. Chris Nickson

You've Got the Power