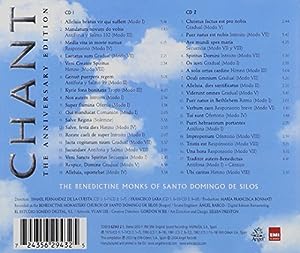 $16.99
As of 2021-03-03 02:00:16 UTC (more info)
Not Available - stock arriving soon
Buy Now from Amazon
Product prices and availability are accurate as of 2021-03-03 02:00:16 UTC and are subject to change. Any price and availability information displayed on http://www.amazon.com/ at the time of purchase will apply to the purchase of this product.
See All Product Reviews

Chant: The Anniversary Edition comes at a time when copies of the original EMI Chant are starting to pop up in thrift stores. Readers may recall the "chant craze" of the mid-'90s, where a disc of 20-year-old recordings of Gregorian chant proved a marketing bonanza, moving seven million units in the process. Apparently EMI thinks people wax nostalgic about such things, as even though there have already been Chant, Chant II, Chant Noel, Chant III, and Chant: The Trilogy, now there is Chant: The Anniversary Edition. This is not to say that there is anything wrong with these recordings -- they are all by the dependable Santo Domingo de Silos Abbey Monks' Choir, a Spanish chorus that can trace its origins back to the 1880s. No two Latin chant choirs sound quite the same, and the Silos Monks' choir is earthy, spontaneous, and somewhat heterodox toward the liturgy, making it at least distinctive in comparison to more typical kinds of Abbey choirs. This 2-for-1 offering includes almost all the original Chant disc, filled out with selections from Chant II and Chant Noel in recordings made by the Spanish label Hispavox between 1973 and 1982. Earlier selections are led by Ismael Fernandez de la Cuesta and later ones by Francisco Lara. Listeners will not be able to tell the difference between the two leaders just through listening, and perhaps EMI likewise is betting you will not be able to tell the difference between this "Chant" and the previous offerings. If you missed it the first time, however, Chant: The Anniversary Edition is a good way to figure out what the hype in 1994 was about.

This set contains the two CDs that, it must be acknowledged, just about started the Chant craze in 1994. The music was actually recorded in the 1970s and 1980s (this new set has been remastered and sounds better than the 1994-95 releases did) and was on sale in Spain and offered at the Monastery of Santo Domingo de Silos for some time before it became "hot." Since then, hundreds of CDs of chant and similar music have appeared, many more polished then these, but perhaps these were so special because they weren't performances: they caught actual Monks in the act of praying, and the meditative quality is undeniably real. Whatever the case, this is music for reflection, calming down, re-fueling and getting away from the hustle and bustle of everyday life--which may be even more needed now than they were 10 years ago. Texts are not supplied and you won't need them; it's all about reverence and mood. Doing nothing but listening to this in 25-minute chunks will allow your breathing to slow and re-energize you. Each 55-minute CD will probably put you to sleep--and this isn't meant as a criticism. --Robert Levine

The Age Of Puccini

This Is the Christ

only $6.62
Not Available
View Add to Cart