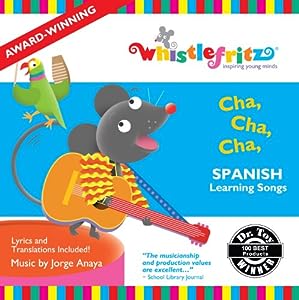 $12.98
As of 2022-06-29 06:09:55 UTC (more info)
Not Available - stock arriving soon
Buy Now from Amazon
Product prices and availability are accurate as of 2022-06-29 06:09:55 UTC and are subject to change. Any price and availability information displayed on http://www.amazon.com/ at the time of purchase will apply to the purchase of this product.
See All Product Reviews

Merengue! Rumba! Bachata! Get ready to cantar (sing), bailar (dance), and aprender (learn) Spanish with Cha, Cha, Cha, a colorful collection of Spanish songs for children. Performed by award-winning singer and songwriter Jorge Anaya, this CD is a delightful mix of lively Latin rhythms that children will love - and parents will too! Samba to Las Vocales (The Vowels), cha cha to Los Números (The Numbers), and polka to Que Llueva. Cha, Cha, Cha makes learning Spanish exhilirating, educational, and fun!Cha, Cha, Cha is a fun, festive introduction to Spanish vocabulary. Dance and sing while learning the letters of the alphabet, numbers, parts of the body, articles of clothing and more. The upbeat songs inspire kids to get on their feet, clap, jump and move. Lyrics and a translation guide are included, providing an easy reference for parents and teachers who are first-time learners of Spanish.

Fun for all ages!

only $6.15
Not Available
View Add to Cart

Keep Christmas With You

only $1.76
Not Available
View Add to Cart