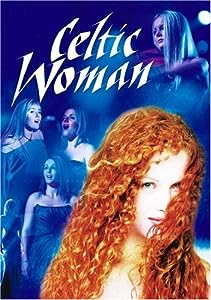 $13.98
As of 2022-09-27 01:28:02 UTC (more info)
Not Available - stock arriving soon
Buy Now from Amazon
Product prices and availability are accurate as of 2022-09-27 01:28:02 UTC and are subject to change. Any price and availability information displayed on http://www.amazon.com/ at the time of purchase will apply to the purchase of this product.
See All Product Reviews

A group of extraordinary talents have come together to produce this stunning showcase of Celtic beauty; classic Irish lasses perform a selection of Irish music that spans from the traditional to enduring pop standards. Arranged by David Downes, who worked as the musical director of the internationally acclaimed show RIVERDANCE, CELTIC WOMAN is a show with broad appeal and demonstrates the remarkable musical acumen of all involved. At its heart are the pure, clear voices of the women who perform, including the 15-year-old Cloe, harpist and singer Orla, soprano M‚av, and the seductive Lisa; virtuoso violinist M ir‚ad rounds out the bill. Continuing in the tradition of song that the Irish heritage has been built upon, these inspired renderings and their engaging delivery are sure to capture the hearts of audiences. The selection of songs includes "Danny Boy," "May it Be," "Isle of Inis Free," "Orinoco Flow," and Nella Fantasia," among many others.

Gorgeous to listen to and gorgeous to look at, Celtic Woman is perfect PBS fare, sort of a Riverdance without the dancing. Drawing on the same New Age-y sound and propulsive energy as that show's solo-voice and choral numbers, the live concert features four attractive young women in strapless evening gowns with soaring voices backed by an orchestra, an Anuna-like chorus, and a large percussion section. The more traditional fare includes Méav Ni Mhaolchatha's "Danny Boy" and "She Moved Through the Fair," and Chloë Agnew's "Ave Maria" (the Bach-Gounod version). Movie and TV selections range from Agnew's "Walking in the Air" (The Snowman) and "Someday" (Disney's Hunchback of Notre Dame) to Lisa Kelly's "May It Be" (the Enya song from The Lord of the Rings: The Fellowship of the King) and Órla Fallon's voice and harp rendition of "Harry's Game." A fifth woman, Máiréad Nesbitt, adds some variety by fiddling "The Butterfly" and "Ashokan Farewell" (best known as the theme from Ken Burns's The Civil War). Occasionally the singers join together, as in Enya's "Orinoco Flow," an a cappella rendition of West Side Story's "Somewhere," music director David Downes's composition "One World," and a stately version of "Jesu, Joy of Man's Desiring." Celtic Woman was created by Downes (like many of the other performers, a Riverdance veteran) along with Sharon Browne and Dave Kavanagh of the Celtic Collections record label. --David Horiuchi

only $5.71
Not Available
View Add to Cart

only $2.01
Not Available
View Add to Cart