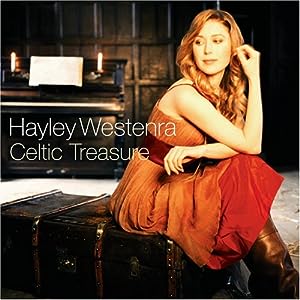 $6.88
As of 2022-09-28 20:09:23 UTC (more info)
Not Available - stock arriving soon
Buy Now from Amazon
Product prices and availability are accurate as of 2022-09-28 20:09:23 UTC and are subject to change. Any price and availability information displayed on http://www.amazon.com/ at the time of purchase will apply to the purchase of this product.
See All Product Reviews

Recorded in Dublin, Ireland, Hayley's third solo album is a very personal collection of classical arias, Irish and Maori folk songs representing treasured people and places in her remarkable musical journey. For the first time the album also includes several original tracks written by Hayley herself. Celtic Treasures is a celebration of Hayley's family roots, and her grandparent's journey across the World on the first boat that left Ireland for New Zealand in the 1880s taking with them a rich musical heritage. Her grandmother a singer, and her grandfather, who played the accordion, were to be important influences on Hayley's musical development.

Having sung before royalty and performed with the Irish super-group Celtic Woman, Italian tenor Andrea Bocelli, and Welsh baritone Bryn Terfel, the very young and remarkably beautiful singer is back with a tribute to her Celtic ancestry. As with her previous Platinum-selling releases (she is already a huge star in her native New Zealand, Japan, Australia, and the UK), the orchestrations are lush, with sighing phalanxes of strings and woodwinds. But in keeping with the avowed theme, there are also soft touches of soulful, wavering tin whistles and vaguely fiddle-like violin vamps. The program is more varied than the album's title might lead one to expect, encompassing everything from "The Last Rose Of Summer" and "Danny Boy" to "Shenandoah," "Scarborough Fair," "Abide With Me," and even a couple of more pop-oriented songs penned by Westenra herself. However, brief sideways winks toward Nashville or the Great White Way do not adulterate the album's overall mood of ethereal, remote bliss. The one misstep is an English-language cover of "Un Bel Di" ("One Fine Day") from Puccini's Madama Butterfly: an aria unsuited to the artist's fragile, bell-like soprano and placid temperament. This aside, established classical crossover/theatrical divas like Sarah Brightman would be wise to begin looking to their laurels. --Christina Roden

Music From the Movies

only $5.82
Not Available
View Add to Cart

The First Recordings of the Boston Symph...