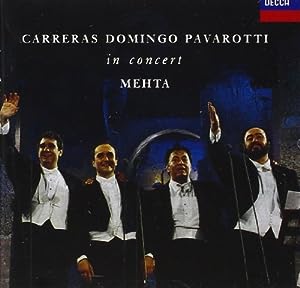 $7.72
As of 2021-06-20 19:56:00 UTC (more info)
Not Available - stock arriving soon
Buy Now from Amazon
Product prices and availability are accurate as of 2021-06-20 19:56:00 UTC and are subject to change. Any price and availability information displayed on http://www.amazon.com/ at the time of purchase will apply to the purchase of this product.
See All Product Reviews

Magic was created one starlit night in July 1990, when Luciano Pavarotti, Placido Domingo and José Carreras met onstage at the Baths of Caracalla in Rome and became the Three Tenors. They eschewed competitive instincts and cooperated in the spirit of mutual admiration to create one of the greatest musical events ever. This concert is an awe-inspiring orgy of the greatest hits for the tenor voice. Domingo and Pavarotti sing perfectly. The audience wins as these vocal supermen compete to seduce the hearts of the audience. One moment Domingo brings thrilling fire and pain to "E lucevan le stelle" from Tosca; the next, Pavarotti rises to heavenly heights in an inspired rendition of "Nessun dorma" from Turandot. Carreras is the competent little brother, one step behind the greatness of the big brothers from opera's Ponderosa. His singing isn't as captivating as that of the big boys; but his enthusiasm and passion are unrivaled. Mehta exquisitely captures the largeness of this bonanza through the grandiose orchestra. --Barbara Eisner Bayer

only $5.78
Not Available
View Add to Cart

My Way: The Best Of Frank Sinatra (2CD)

Nothing But the Best