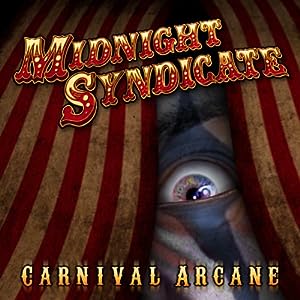 $11.94
As of 2021-04-22 09:53:09 UTC (more info)
Not Available - stock arriving soon
Buy Now from Amazon
Product prices and availability are accurate as of 2021-04-22 09:53:09 UTC and are subject to change. Any price and availability information displayed on http://www.amazon.com/ at the time of purchase will apply to the purchase of this product.
See All Product Reviews

The train smoke drifting through the pale moon light signals the arrival of the Lancaster-Rigby Carnival. In a forest clearing, these mesonoxian visitors await your arrival. Stroll along the midway and behold wonders both fantastic and macabre from every corner of the globe. And be sure to ride their one of a kind carousel for an experience you'll never, ever forget.


Halloween Music Maestros Midnight Syndicate's 2011 haunted Victorian carnival-themed CD is one the most critically-acclaimed albums of their 16+ year career. If you enjoy the smell of fairy floss, the thrill and mystery surrounding the turn-of-the-century traveling carnival then this disc is a must-have. Winner of the 2012 RONDO HATTON CLASSIC HORROR AWARD for BEST HORROR CD AND SOUNDTRACK.


FEARnet.com (July 15, 2011) The team of Edward Douglas and Gavin Goszka have been closely associated with Halloween and the haunted house industry for over 20 years now, and last year they broke into filmmaking with their award-winning horror film THE DEAD MATTER, which featured horror heavyweights like Andrew Divoff (WISHMASTER) and Tom Savini. Their fans crave a fresh helping of Halloween goodies with each release, and the band rewards them with new material almost every year. For their latest effort, they crafted the story of the Lancaster-Rigby Carnival, which Douglas describes as a shadowy, turn-of-the-century traveling circus with more than a few skeletons in its closet. To capture the mood, he and Gavin did intensive research into carnivals of the early 20th century to try to ensure that the sounds and music work together to really immerse you in this world and the time period. Douglas also credits Bradbury's novel for much of CARNIVAL ARCANE's atmosphere, as hinted in the liner notes. 'It's a pretty wild disc, Douglas told FEARnet. 'More than ever, we really focused on using sound effects and design to pull you into the world of the disc. The music is still the focus, absolutely, but there are many times that it feels like an 'imaginary film' more than anything we've done to this point.' He also explained how the more horrific elements of the story don't surface immediately. The first half of the disc is not purely dark, he explained. However, something happens midway through and things take a pretty nasty turn. Horror fans and our friends in the haunted house industry will get a kick out of that. CARNIVAL ARCANE also features the vocal talents of Jason Carter (LORD OF THE RINGS: BATTLE FOR MIDDLE EARTH, BABYLON 5, THE DEAD MATTER) and fellow THE DEAD MATTER cast members Brian Van Camp, and Dennis Carter, Jr. - Gregory Burkart, FEARnet

Old Rivers/Twas the Night Before Christm...