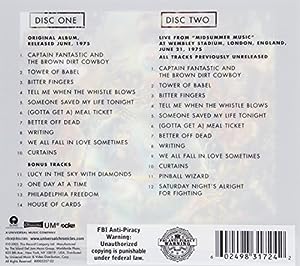 $23.91
As of 2022-06-24 22:57:23 UTC (more info)
Not Available - stock arriving soon
Buy Now from Amazon
Product prices and availability are accurate as of 2022-06-24 22:57:23 UTC and are subject to change. Any price and availability information displayed on http://www.amazon.com/ at the time of purchase will apply to the purchase of this product.
See All Product Reviews

The first album to enter the Billboard Album Chart at #1, and keep that position for seven weeks, now certified triple platinum, and producing one of Elton John's greatest hits, 'Someone Saved My Life Tonight', Captain Fantastic And The Brown Dirt Cowboy is also a unique album in the legendary career of Elton John. Written and sequenced chronologically, it tells the saga of Elton and long-time lyricist/partner Bernie Taupin and their career up to its release in June of 1975. Now, 30 years later, this remarkable concert has been remixed (including bonus performances of 'Pinball Wizard' and 'Saturday Night's Alright For Fighting') and is the second CD on this 30th Anniversary Deluxe Edition of Captain Fantastic. The entire original album has been remastered by Elton's engineer and the three bonus tracks from the most recent CD reissue have been added 'Lucy In the Sky With Diamonds', 'One Day At A Time', and 'Philadelphia Freedom'. Plus, for this Deluxe Edition, 'House Of Cards', the b-side for 'Someone Saved My Life Tonight', is added. Island. 2005.

Elton John has always liked having it both ways. He's flamboyant and vain, yet empathetic and sincere. He sits at his piano playing sentimental melodies, but the words come not from inside his soul but from friend Bernie Taupin. For Captain Fantastic, he and Taupin wrote a concept album which sketches their career together. "Someone Saved My Life Tonight" is easily the strongest song outside of the concept. The addition of several songs "Lucy in the Sky with Diamonds" featuring John Lennon, "Philadelphia Freedom," and "One Day at a Time" blow the concept but up the entertainment value considerably. --Rob O'Connor