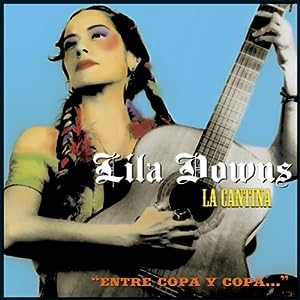 $7.00
As of 2022-09-27 04:55:28 UTC (more info)
Not Available - stock arriving soon
Buy Now from Amazon
Product prices and availability are accurate as of 2022-09-27 04:55:28 UTC and are subject to change. Any price and availability information displayed on http://www.amazon.com/ at the time of purchase will apply to the purchase of this product.
See All Product Reviews

Exploring and expressing Mexico's rich culture has been a lifelong passion for Lila Downs. On La Cantina 'Entre Copa y Copa...', Lila Downs focuses intently on the rich and familiar repertoire of Mexico's beloved cancion ranchera tradition. The cancion ranchera is typically a ballad about heartache, solitude, love and longing - a song such as one would typically hear in a local cantina. It is a musical tradition quite akin to Portugal's Fado, or to the Delta blues - deeply soulful, often lamenting, always emotionally vivid. Narada. 2006.

As a follow-up to her 2005 Latin Grammy win, Mexican-American diva Lila Downs has chosen to release a loving tribute to canciones rancheras, the heartfelt ballads ubiquitous in cantinas throughout Mexico. With their merry accordion riffs and perky snare-led rhythms, the tunes can be reminiscent of Cajun music or Colombian cumbias, but even the cheeriest numbers harbor fate-haunted undertones. The singer’s darkly sweet, resonant voice interprets each the fifteen tracks to a fare-thee-well. Her fiery South-of-the-border exhibitionism and touches of dry humor are mirrored by assorted comedic whiz-bang sounds that surface amid the mostly acoustic mix. Third generation accordionist Flaco Jimenez, the doyen of Tex-Mex conjunto (a working class style descended from an older but still extant groove known as norteño,) weaves in and out among bass, harps, mariachi-like fiddles and assorted guitars. Peppered with antique-sounding bytes, dramatic spoken poems and even an in-your-face rap (during "Tu Recuerdo Y Yo", track four), the album plays like a slightly surreal movie that is no less affecting for being nearly untranslatable. --Christina Roden