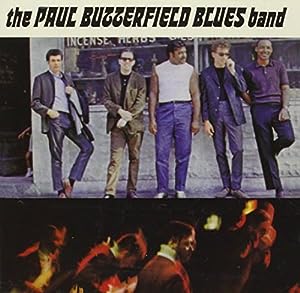 $5.79
As of 2021-07-26 21:14:45 UTC (more info)
Not Available - stock arriving soon
Buy Now from Amazon
Product prices and availability are accurate as of 2021-07-26 21:14:45 UTC and are subject to change. Any price and availability information displayed on http://www.amazon.com/ at the time of purchase will apply to the purchase of this product.
See All Product Reviews

Bloomfield, Bishop and Butterfield knocked down walls between black and white with their strong love of blues and their equally powerful chops. Here are Born in Chicago; Blues with a Feeling; Last Night; Mellow Down Easy , and the rest of their 1965 debut!

A slew of albums by young white men out of their minds in love with music made by older black men came from both sides of the Atlantic during the mid-1960s, but two records really laid the groundwork for the decade's blues revival--the self-titled releases by John Mayall's Bluesbreakers out of London and the Paul Butterfield Blues Band out of Chicago. Both bands were led by harmonica-blowing vocalists; both featured ascending guitar gods--Eric Clapton with Mayall and Mike Bloomfield with Butterfield. Butterfield's ensemble, however, came of age closer to the roots of the music. The rhythm section heard on the group's 1965 debut was hired away from Howlin' Wolf, and Butterfield, while still in his early 20s when the album shipped, was already a familiar face on the Windy City's club circuit. "Born in Chicago" opens the album on a gritty note that never flags through this 11-track landmark. The slashing duo guitars of Bloomfield and Elvin Bishop and Butterfield's flash harp helped make Muddy Waters fathomable for a new audience and, decades later, it's still easy to understand how. --Steven Stolder

King Of the The Delta Blues - Robert Joh...

Still on the Levee by Signature Records