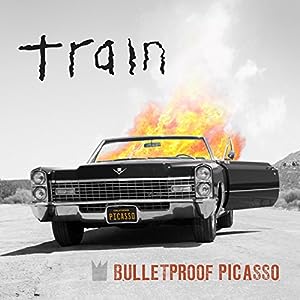 $7.98
As of 2022-06-27 06:26:58 UTC (more info)
Not Available - stock arriving soon
Buy Now from Amazon
Product prices and availability are accurate as of 2022-06-27 06:26:58 UTC and are subject to change. Any price and availability information displayed on http://www.amazon.com/ at the time of purchase will apply to the purchase of this product.
See All Product Reviews

Three-time Grammy winning San Francisco band Train's upcoming new album, Bulletproof Picasso, is available September 16th. Bulletproof Picasso was produced by previous Train collaborator Butch Walker, and reflects frontman-singer/songwriter Pat Monahan's penchant for distinctive musical stylings. "I've always wanted to emotionally connect with people through the songs," says Monahan. "But I also want to get into people's lives with this album. We're very excited about Bulletproof Picasso and we re looking forward to performing some of the new songs for all our fans."

The album's first single, "Angel In Blue Jeans," soared to the Top 15 of Triple A and Adult Top 40 radio in only a month, joining the band's successful arsenal of other radio-embraced singles throughout their two-decade career. Other songs on the new album include the combustible title track, "Bulletproof Picasso," "Cadillac, Cadillac," "Just A Memory," "Give It All," and "The Bridge," among others (full 12-song track listing below).

Train has sold more than ten million albums worldwide, thirty million tracks worldwide, with numerous platinum/gold citations on their mantle, 3 Grammy Awards, 2 Billboard Music Awards and dozens of other honors and nominations. Their gift for delivering memorable songs that capture the listener's imagination has seen them achieve unprecedented radio and social media traction, with the eight-time Grammy nominees heralded as a standard bearer of riveting, roots-based pop around the world. Their most recent album, 2012's California 37 spawned the hit "Drive By" among other songs, a multi-platinum single that reached the Top Ten in 13 countries, adding to the prolific Train set-list which already includes multiple signature smashes such as their Grammy winning classic "Drops Of Jupiter (Tell Me)," the chart-topping "Meet Virginia," and "Calling All Angels." The band snagged another Grammy in 2011 for their global smash "Hey Soul Sister," (the #1 hit and biggest selling single of 2010) from their 2009 multi-platinum album, Save Me, San Francisco.

Shepherd In a Sheepskin Vest