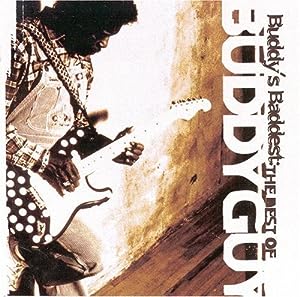 $10.01
As of 2021-07-25 19:59:35 UTC (more info)
Not Available - stock arriving soon
Buy Now from Amazon
Product prices and availability are accurate as of 2021-07-25 19:59:35 UTC and are subject to change. Any price and availability information displayed on http://www.amazon.com/ at the time of purchase will apply to the purchase of this product.
See All Product Reviews

The title's baloney. Sure, some of Buddy Guy's most blistering guitar playing has been captured on his '90s recordings for Silvertone, but with albums like Muddy Waters's 1964 Folk Singer and his own 1967 solo debut A Man & the Blues on his résumé, Guy's status as a Chicago blues giant was assured long before his 1991 comeback Damn Right, I've Got the Blues. Nonetheless, that tune, the instrumental tribute "Remembering Stevie" (for the late guitar-slinger Vaughan), "Five Long Years," and the previously unissued "Miss Ida B" testify that at age 65 Guy still possesses rare depth and fire. His singing is big and soulful, capable of cheerleading a party or hurtling down to the depths of Delta blues heartache. His six-stringing remains wildly inventive and unpredictable, even on slight numbers like "She's a Superstar." And the inclusion of blatant stabs at the pop charts such as his "Midnight Train" duet with Jonny Lang take nothing away from the passion he puts into true blues performances like "I Need Your Love So Bad" and "Innocent Man," leftovers from earlier sessions that surface here. Baddest or not, this CD spotlights one of our greatest bluesmen in fine form. --Ted Drozdowski

The Clones Of Dr. Funkenstein

I'll Play the Blues for You - Live

I Wanna Get Funky [LP]