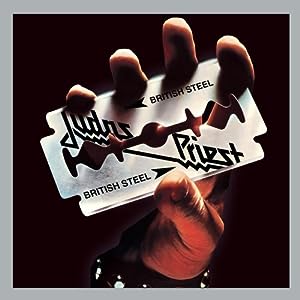 $7.25
As of 2021-12-05 11:29:40 UTC (more info)
Not Available - stock arriving soon
Buy Now from Amazon
Product prices and availability are accurate as of 2021-12-05 11:29:40 UTC and are subject to change. Any price and availability information displayed on http://www.amazon.com/ at the time of purchase will apply to the purchase of this product.
See All Product Reviews

All our books are brand new. We ship worldwide

The guitar riff from "Breaking the Law" is one of the most recognizable from early 1980s heavy metal. Though British Steel sounds dated these days, it's also a classic slice of metal, one of the best from a band that defined the genre in the late '70s and early '80s. Everything that ultimately became characteristic of heavy metal is here, from the lightning-fast riffs on "Rapid Fire," the anthemic "Metal Gods," and "United" to the obligatory party song "Living After Midnight" to the equally obligatory youth-rebellion song, "You Don't Have to Be Old to Be Wise." British Steel is unquestionably Priest at their peak. The 2001 remastered reissue includes two bonus tracks--a previously unavailable studio selection called "Red, White & Blue" and a live take on "Grinder." --Genevieve Williams

s Of The World

only $9.67
Not Available
View Add to Cart