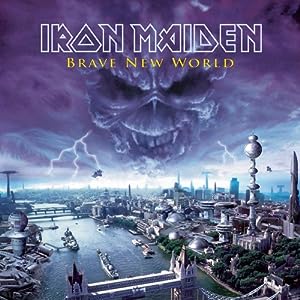 $12.94
As of 2021-06-14 12:28:39 UTC (more info)
Not Available - stock arriving soon
Buy Now from Amazon
Product prices and availability are accurate as of 2021-06-14 12:28:39 UTC and are subject to change. Any price and availability information displayed on http://www.amazon.com/ at the time of purchase will apply to the purchase of this product.
See All Product Reviews

Iron Maiden are nothing if not consistent. Since 1980's self-titled debut, they've been one of metal's preeminent torchbearers, spewing forth dramatic old-school, Euro-flavored arena-style metal, that to a non-fan might seem akin to Spinal Tap. The band's legion of followers, however, will rejoice at the 67 minutes of archetypal Maiden found on Brave New World. The album reunites their classic-period singer Bruce Dickinson with his longtime band following his self-imposed six-year absence. Also back on board is guitarist Adrian Smith, giving Maiden a scorching three-guitar lineup. Maiden's lyrical scope is as historic and elaborate as ever, their muscular musicality verging on the melodramatic. But that's what Maiden have always been about, and their sound is instantly recognizable on such meaty cuts as "The Mercenary," "The Fallen Angel," and "Ghost of the Navigator." Brave New World's signature time changes, guitar harmonies, and urgent vocals render moot any question as to whether it will spawn Maiden classics to rival the likes of "Run to the Hills" and "Number of the Beast." Bruce is back, and all's right on this Brave New World. --Katherine Turman

The Best Of - Motorhead