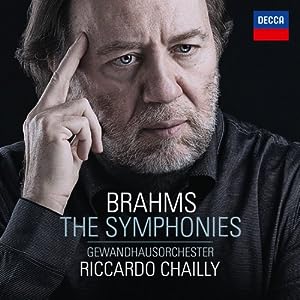 Following the 2011 landmark Beethoven cycle, Riccardo Chailly returns with a recording of the complete Brahms symphonies and orchestral works including the overtures and Haydn Variations.

Rarities include world premiere recordings of two piano intermezzi orchestrated by Paul Klengel (brother of the Gewandhaus long-standing principal cellist Julius Klengel); the 9 Liebeslieder waltzes; the original first performance version of the Andante of Symphony No. 1 and the even rarer revised opening of the Fourth Symphony.

Chailly has radically rethought his approach to these works, re-examining the scores and returning to the recorded interpretations of a generation of conductors alive during Brahms lifetime, principally Felix Weingartner and one of his Gewandhaus predecessors Bruno Walter.

Chaillys Brahms is highly regarded by leading critics Chailly has worked well to create a style of interpretation which mixes the orchestras 250-year-old tradition with thoroughly modern, historically informed performance practice. This made for no-nonsense, unstuffy, youthful Brahms. Musical Criticism 2007

The Daily Telegraph reviewing his Proms performance of the Fourth Symphony wrote Chailly is not a conductor to linger unnecessarily, and he injected the first movement with an uncommon surge and passion…the finales fusion of structural grandeur and instrumental detail was conveyed with a masterly sense of direction and purpose.