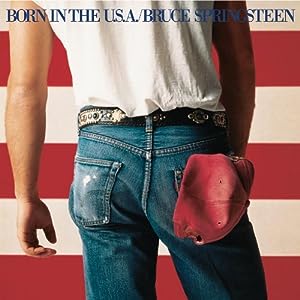 $5.99
As of 2022-08-08 00:16:14 UTC (more info)
Not Available - stock arriving soon
Buy Now from Amazon
Product prices and availability are accurate as of 2022-08-08 00:16:14 UTC and are subject to change. Any price and availability information displayed on http://www.amazon.com/ at the time of purchase will apply to the purchase of this product.
See All Product Reviews

1984 album from the New Jersey rocker, the blockbuster album that made him a bona-fide international superstar. The album yielded an amazing seven Top 10 singles: 'Born In The U.S.A.', 'Cover Me', 'I'm on Fire', 'I'm Goin' Down', 'Glory Days', 'Dancing In The Dark' and 'My Hometown' .

Born in the U.S.A. is an album painted in big, broad strokes. But it was still too subtle for some--namely politicians who tried to tap the title track as a jingoistic anthem when it is in fact a bitter diatribe by a Vietnam War vet whose country forgot him. The rest of the album is a glorious grab bag of radio-ready populist anthems--his best display of pure pop songwriting ever--including "No Surrender," "Dancing in the Dark," "Bobby Jean," and "Glory Days" alongside more circumspect numbers such as "My Hometown" and "I'm On Fire." It's not true that there's no arguing with success, but in this case Springsteen's widespread acclaim was warranted. With Born in the U.S.A., all those predictions from a decade earlier--that Springsteen was the future of rock--had come true. --Daniel Durchholz

only $8.73
Not Available
View Add to Cart