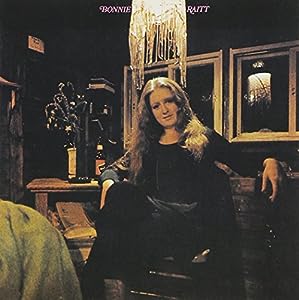 $5.27
As of 2021-07-21 22:49:40 UTC (more info)
Not Available - stock arriving soon
Buy Now from Amazon
Product prices and availability are accurate as of 2021-07-21 22:49:40 UTC and are subject to change. Any price and availability information displayed on http://www.amazon.com/ at the time of purchase will apply to the purchase of this product.
See All Product Reviews

Recorded live in an old Minnesota garage, Raitt's debut is highlighted by ripping versions of Stephen Stills' "Bluebird" and Robert Johnson's "Walking Blues," as well as some mighty fine originals.

Never mind the Radcliffe education--Bonnie Raitt's real schooling occurred off-campus, in the folk and blues clubs of the Northeast, where she opened shows for legends such as Mississippi Fred McDowell, Buddy Guy and Junior Wells, Arthur "Big Boy" Crudup, and others. Raitt's self-titled debut, recorded when she was only 21 years old, is a stunner that still holds up decades later. Her slide-guitar skills are already in place, and her choice of material--which includes a reading for Stephen Stills's folk-rock gem "Bluebird," a sinuous take of Robert Johnson's classic "Walkin' Blues," a bluesy reworking of the Marvelettes' "Danger Heartbreak Dead Ahead," and a pair of fine originals ("Thank You" and "Finest Lovin' Man")--is impeccable. Best of all are two songs from Raitt's mentor, Sippie Wallace--"Women Be Wise" and the startlingly randy "Mighty Tight Woman." It was clear from the beginning that Raitt's was a career to watch. --Daniel Durchholz

Whiskey for the Holy Ghost