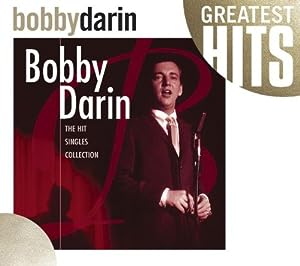 $29.99
As of 2021-06-19 18:58:47 UTC (more info)
Not Available - stock arriving soon
Buy Now from Amazon
Product prices and availability are accurate as of 2021-06-19 18:58:47 UTC and are subject to change. Any price and availability information displayed on http://www.amazon.com/ at the time of purchase will apply to the purchase of this product.
See All Product Reviews

A 20-track hits collection featuring Bobby's biggest Atlantic, Atco AND Capitol sides! Includes Splish Splash; Dream Lover; Mack the Knife; Queen of the Hop; Beyond the Sea; You Must Have Been a Beautiful Baby; Clementine; Artificial Flowers; Things; 18 Yellow Roses; You're the Reason I'm Living; If I Were a Carpenter; Early in the Morning; Plain Jane , and more.

Bobby Darin was one of the most personally complex and unpredictable artists of the rock era. Indeed, it's hard to find another major artist who reinvented himself with the deceptive ease and overwhelming success chronicled on this 20-track highlight disc. After scoring three lively and considerable Top 10 successes in the space of a year in the late 1950s ("Splish Splash," "Queen of the Hop," "Dream Lover"), Darin traded in his teen idol sweater 'n' slacks for a tux and tie (evidence suggests he considered rock a passing fad!) and went gunning for Sinatra and the Rat Pack. The immediate results were the Grammy-winning No. 1 legend "Mack the Knife" (adapted from Kurt Weill's "Moritat" in The Threepenny Opera) and the enduring, French-inspired Top 10 hit "Beyond the Sea." If Darin spent the early '60s alternately goosing standards from the American songbook ("Clementine," "Bill Bailey," "Lazy River," "You Must Have Been a Beautiful Baby," etc.) and mending a few rock-pop fences ("Multiplication," "Things"), he still had another surprise in store. His Top 10 take on Tim Hardin's dolorous "If I Were a Carpenter" cast him all too convincingly as conscientious '60s folkie. Other highlights here include his irresistible, swinging take on the lyrically bleak "Artificial Flowers" and his successful, self-penned nods to the '60s Nashville sound, "You're the Reason I'm Living" and "18 Yellow Roses." Darin was considerably more than the first postmodern lounge Revivalist, and herein lies the evidence. --Jerry McCulley

only $9.36
Not Available
View Add to Cart

only $8.02
Not Available
View Add to Cart