Bob Marley and the Wailers Live at the Rainbow by Island 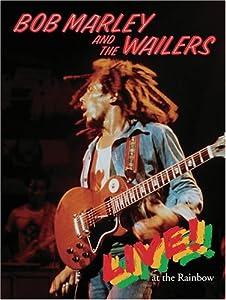 Bob Marley and the Wailers Live at the Rainbow by Island

$19.98
As of 2022-08-04 05:38:00 UTC (more info)
Not Available - stock arriving soon
Buy Now from Amazon
Product prices and availability are accurate as of 2022-08-04 05:38:00 UTC and are subject to change. Any price and availability information displayed on http://www.amazon.com/ at the time of purchase will apply to the purchase of this product.
See All Product Reviews

We are proud to stock the fantastic Bob Marley and the Wailers Live at the Rainbow.

With so many available today, it is wise to have a name you can recognise. The Bob Marley and the Wailers Live at the Rainbow is certainly that and will be a excellent buy.

For this reduced price, the Bob Marley and the Wailers Live at the Rainbow is highly respected and is always a regular choice with most people. Island have added some nice touches and this means great value for money.

First time on DVD. Bob Marley & The Wailers came to London's Rainbow Theatre in the summer of 1977. The Exodus album was riding the British charts. The band's potent, magical music was everywhere; on the airwaves, the jukeboxes, the sound system, hi-fi's. Live At The Rainbow captures a moment in time at the height of Bob Marley's popularity with a digitally enhanced picture, remastered DTS and Dolby Digital 5.1 surround sound, and Dolby Digital stereo. As a special bonus, the award-winning documentary Caribbean Nights: The Bob Marley Story and recently shot footage of The Bob Marley Museum, Tuff Gong Studios and Nine Mile have been included on this special two-disc DVD set.

On June 2, 1977, London's Rainbow Theatre "caught fire"--in the best possible way, of course. At the time, Bob Marley and the Wailers, already huge in the UK, were on tour in support of the locally produced Exodus. While the show starts off with the slow-burning "Trenchtown Rock" (1973's African Herbsman), Marley's performance grows increasingly incendiary until, by the time they get to the climactic closer, "Exodus," it looks as he's in another world entirely. The turning point is an extended version of "Crazy Baldhead" (1976's Rastaman Vibration), in which Marley seemingly enters a trance, performing primarily with eyes closed. By the late-1970s, Peter Tosh and Bunny Wailer were long gone, making the electrifying Marley more the focus than ever before (and for the first few songs, the rest of the band is barely visible). Other highlights includes "Lively Up Yourself" (1974's Natty Dread), in which Julian "Junior" Marvin throws some Hendrix-style moves into the mix, and "Get Up, Stand Up" (1973's Burnin'), in which the audience echoes Marley's words, as lost in the moment as the man on the stage. This two-disc set includes the 1984 BBC documentary Caribbean Nights (AKA The Bob Marley Story). It features performance excerpts ("Slave Driver" from 1972, "Stir It Up" and "Rastaman Chant" from 1973, "Bad Card" from 1980, etc.), and interviews with Tosh, Joe Higgs, Chris Blackwell, Judy Mowatt, wife Rita Marley, and mother Cedella Booker. --Kathleen C. Fennessy

A Hundred Miles or More: A Collection

only $6.86
Not Available
View Add to Cart