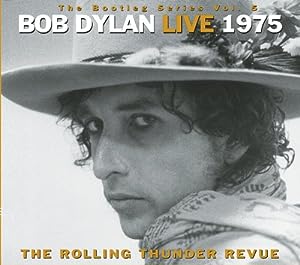 $16.79
As of 2023-02-05 17:45:10 UTC (more info)
Not Available - stock arriving soon
Buy Now from Amazon
Product prices and availability are accurate as of 2023-02-05 17:45:10 UTC and are subject to change. Any price and availability information displayed on http://www.amazon.com/ at the time of purchase will apply to the purchase of this product.
See All Product Reviews

Bob Dylan's Rolling Thunder tour was a gypsy caravan of sorts involving such friends as Joan Baez, Roger McGuinn and Joni Mitchell. Now, for the first time, this legendary roadshow is displayed in all its glorious, mixed-up confusion on 2 CDs that cull 22 performances from the Worcester, Boston, Cambridge and Montreal shows. A 56-page booklet accompanies It Ain't Me, Babe; Mr. Tambourine Man; Blowin' in the Wind; Just Like a Woman , and more. Must-hear mid-'70s Dylan!

One of the many oddities of Bob Dylan's long and unruly career has been the rather cursory recording treatment given his stint as ringleader of the Rolling Thunder Revue. It's a shortcoming that's rectified with the release of Live 1975. Prior to the appearance of this two-disc collection, Rolling Thunder's eclectic road show was chronicled only in the infrequently screened, Dylan-directed Renaldo & Clara film and the bafflingly brief and one-note 1976 live set, Hard Rain. In contrast to its predecessor, this set, culled from four appearances made in November and December of '75, captures the breadth and subtleties of Dylan's Rolling Thunder performances. "Tonight I'll Be Staying Here with You," formerly a coda from Nashville Skyline, is given a rather incongruous bite here, while "It Ain't Me, Babe" is colored brightly by multi-instrumentalist David Mansfield along with erstwhile David Bowie guitarist Mick Ronson, the sparkplug of the gratifyingly ragtag group that coalesced on short notice. Solo acoustic performances weave through caterwauling full-band treatments of songs old ("The Lonesome Death of Hattie Carroll) and new ("Hurricane" and four other selections from Desire, which wouldn't hit the racks until early '76). While the contributions of a number of caravan cohorts and guests are left out, Joan Baez shares the spotlight with Dylan on four numbers, most notably on the rarity "Mama, You Been on My Mind" and the traditional "The Water Is Wide." But despite its cavalcade trappings, it was Dylan's show, and this collection demonstrates finally just how close to his '60s peak the '70s Dylan was. --Steven Stolder