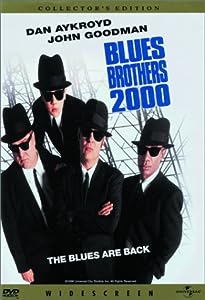 $7.33
As of 2022-01-10 17:03:28 UTC (more info)
Not Available - stock arriving soon
Buy Now from Amazon
Product prices and availability are accurate as of 2022-01-10 17:03:28 UTC and are subject to change. Any price and availability information displayed on http://www.amazon.com/ at the time of purchase will apply to the purchase of this product.
See All Product Reviews

Eighteen years after the Brothers' original "mission from God", Elwood Blues (Dan Aykroyd) is getting out of prison and discovering that much has changed in the time he's been away. His partner, Jake, is gone, his band is no longer together and the orphanage where he grew up has been demolished. Elwood soon realizes that he must embark on a whole new mission - to reassemble the old band, this time with the help of a soulful bartender (John Goodman), compete at Queen Moussette's (Erykah Badu) Battle of the Bands and set a wayward orphan named Buster on the path to redemption. In the midst of the mayhem, he's got to prove to the police that there's magic in the music...and a mysterious method behind the Blues Brothers' madness. Special appearances by B.B. King, Aretha Franklin, James Brown, Johnny Lang, Blues Traveler, Eric Claption and many more. It's an action-packed comedy with lots of Rhythm and Blues.

It's hard to ignore the sad and conspicuous absence of the late John Belushi, but this long-delayed sequel to 1980's The Blues Brothers still has Dan Aykroyd--as Chicago bad boy and blues rocker Elwood Blues--to keep the music alive. Once again, Elwood's trying to reunite the original Blues Brothers Band, and this time he's got a strip-joint bartender (John Goodman) and a 10-year-old orphan named Buster (J. Evan Bonifant) joining him at center stage. Believing that Elwood has kidnapped the kid, the cops are hot on his trail as the reunited band hits the road for the Battle of the Bands in Louisiana and the All-Star Blues Jam that ends the movie in a rockin' blaze of glory. It's a shameless clone of the first film, and nobody--especially not Aykroyd or director John Landis--seems to care that the story's not nearly as fun as the music that's used to stretch it out. Of course there's a seemingly endless parade of stunts, including a nonstop pileup of police cars that's hilariously absurd, but what really matters here--indeed, the movie's only saving grace--is the great lineup of legendary blues musicians. Aretha Franklin, James Brown, Junior Wells, Eric Clapton, B.B. King, Jonny Lang, Eddie Floyd, and Blues Traveler are among the many special guests assembled for the film, and their stellar presence makes you wonder if the revived Blues Brothers shouldn't remain an obscure opening act. The collector's edition DVD includes production photos, the theatrical trailers, and a behind-the-scenes featurette about the making of the film including interviews with the principal cast. --Jeff Shannon

only $3.67
Not Available
View Add to Cart