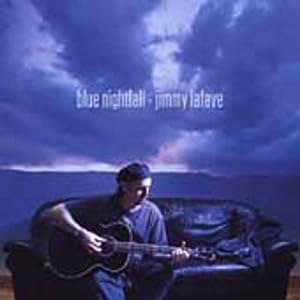 $12.77
As of 2020-09-23 05:37:29 UTC (more info)
Not Available - stock arriving soon
Buy Now from Amazon
Product prices and availability are accurate as of 2020-09-23 05:37:29 UTC and are subject to change. Any price and availability information displayed on http://www.amazon.com/ at the time of purchase will apply to the purchase of this product.
See All Product Reviews

BLUE NIGHTFALL is the first album in nearly 4 years from "one of America's greatest voices - Dave Marsh" Jimmy LaFave. Texas-born, Oklahoma-raised, he is one of the iconic voices of the Lone Star STate and a preeminent figure in Texas music. Twice-named "Singer-Songwriter of the Year" in Austin, his music is an intoxicating blend of soul folk and rock.

Though Bob Dylan and Woody Guthrie have long served as the major musical touchstones for veteran folk-rocker Jimmy LaFave, the shimmering atmospherics of this release's title track suggest a chicken-fried Van Morrison, while the reckless rock 'n' roll of "Music from the Motor Court" conjures comparisons to a renewed Jerry Lee Lewis. From the delicate balladry of "Rain Falling Down" to the Jack Kerouac homage of "Bohemian Cowboy Blues," LaFave remains an uncommonly emotive vocalist, with his tremulous tenor always on the verge of a soulful sob. But where his voice has long been more memorable than much of his original material, he establishes himself here as a songwriter of maturity, reflection, and range. The arrangements are as subtle as the musical backing is superb, putting the focus on LaFave and the way that his voice enhances his songs of all-American wanderlust. --Don McLeese