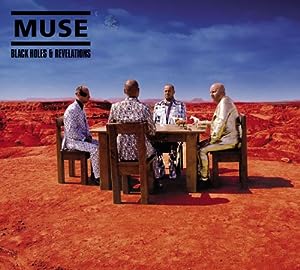 $5.32
As of 2023-01-22 02:09:25 UTC (more info)
Not Available - stock arriving soon
Buy Now from Amazon
Product prices and availability are accurate as of 2023-01-22 02:09:25 UTC and are subject to change. Any price and availability information displayed on http://www.amazon.com/ at the time of purchase will apply to the purchase of this product.
See All Product Reviews

With so many on offer recently, it is good to have a make you can recognise. The Black Holes & Revelations is certainly that and will be a excellent buy.

For this great price, the Black Holes & Revelations comes widely respected and is a regular choice amongst lots of people. Warner Bros / Wea have added some nice touches and this results in great value for money.

In 2004, U.K. favorite Muse broke through in the U.S. with Absolution and major performances across America that won legions of new fans. In 2006, Muse takes a bold new step with Black Holes And Revelations, a powerful, upbeat epic album that takes the band's music to a whole new dimension. Once again co-produced by Rich Costey [Rage Against The Machine, Audioslave], Muse incorporates influences from electronica and Prince to pure pop.

Sounding like the confident, ambitious superstars they already are in their native UK, Muse follows up their breakthrough Absolution with an album that tempers the trio's unabashed grandiosity and apocalyptic obsessions with a smart pop groove. The minimalist angst of the opening "Take A Bow" may bridge the goth-pop conceits of the collection's successful predecessor, but those expectations are quickly kicked aside by "Starlight"'s synth-pop bliss, the falsettoed, space-disco thump of "Supermassive Black Hole" and the chilly, New Wave redux sheen of "Map of the Problematic"; so much for being held hostage to those early Radiohead comparisons. Indeed, on the lilting "Soldier's Poem" vocalist Matthew Bellamy cannily channels Freddie Mercury while "Assassin" pulses with the familiar metallic nerve and lyrical dread of Muse past. But by the time "Knights of Cydonia" erupts in a wrenching, melodramatic climax that somehow fuses ELP, Davie Allan, Procul Harum and Chris Isaak with enough giddy abandon to suspend disbelief, Muse have long since proved their case as genre-be-damned rock world-beaters. --Jerry McCulley