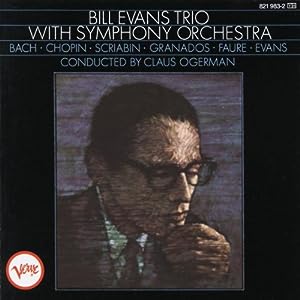 Throughout his career, pianist-composer Bill Evans successfully melded Bud Powell's fiery bop-paced technique with the lyricism and harmonic language of the French impressionists Ravel and Debussy. So it was only natural that he would record a session that combines the jazz and classical traditions.

Released in 1965, this date features Evans's trio with drummer Larry Bunker, who, three decades later, guest-starred on Diana Krall's When I Look in Your Eyes, and the sensitive bassist Larry Bunker. They're augmented by the azure-tinged arrangements by the famed conductor Claus Ogerman, who worked his magic with artists from Antonio Carlos Jobim to Frank Sinatra. The result of this union is a swinging and seamless interplay in which improvisation becomes spontaneous composition, and vice versa. The linearity and logic of Evans's lines erase centuries of musical distance from the works of Bach, Chopin, Granados, Fauré, and Scriabin, with the trio's trademark telepathy expressed in 4/4 and 3/4 time signatures and light Latin tinges. Evans's haunting compositions, "My Bells" and "Time Remembered," imbued by Ogerman's ethereal strings, are the jewels of this delightful recording, whose brilliance has increased with time. --Eugene Holley Jr.