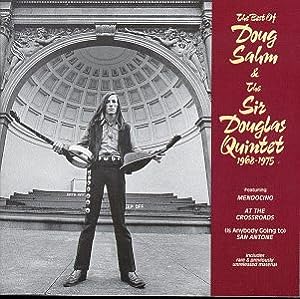 $8.37
As of 2022-10-03 06:21:44 UTC (more info)
Not Available - stock arriving soon
Buy Now from Amazon
Product prices and availability are accurate as of 2022-10-03 06:21:44 UTC and are subject to change. Any price and availability information displayed on http://www.amazon.com/ at the time of purchase will apply to the purchase of this product.
See All Product Reviews

This Texas roots-rock treasure blended blues, country and rock 'n' roll. Here are 22 favorites, key album cuts and unissued tunes: Mendocino; Is Anybody Going to San Antone; Be Real; In the Dark; Nuevo Laredo , and more!

The British Invasion of the mid-1960s was so pervasive that it didn't take much more than a modified pudding-bowl haircut and appending "Sir" to your name to make a substantial portion of the record-buying public think you were one of those hip, loyal-to-the-crown blokes just then dominating the airwaves. But "Sir Douglas" was actually Texan Doug Sahm, and the Quintet owed less to the Beatles than to Tex-Mex border sounds--the hybrid of rock, country, and conjunto that Sahm seemingly absorbed like a sponge. This collection picks up after their early regional successes (and the shuffling gem "She's About a Mover"), spanning the period from their national breakthrough, "Mendocino" (with its sparkling Farfisa organ fills by Augie Meyers) through the mid-'70s. In between, Sahm and company mirrored the hippie-driven musical eclecticism of the era in his own idiosyncratic way. In fact, the music herein is the roots of Sahm and Meyers's beloved Texas Tornados, as attested by tracks like "Nuevo Laredo," "Let's Go to Mexico," and "Texas Tornado." If joyous musical border-hopping is your pleasure, look no further. --Jerry McCulley

Peace Is the Mission

The Very Best of Chad & Jeremy