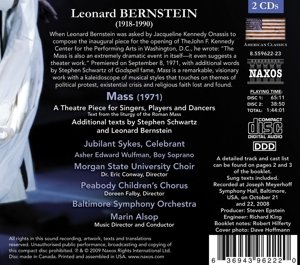 $14.40
As of 2022-10-01 12:17:23 UTC (more info)
Not Available - stock arriving soon
Buy Now from Amazon
Product prices and availability are accurate as of 2022-10-01 12:17:23 UTC and are subject to change. Any price and availability information displayed on http://www.amazon.com/ at the time of purchase will apply to the purchase of this product.
See All Product Reviews

When Leonard Bernstein was asked by Jacqueline
Kennedy Onassis to compose the inaugural work
for the opening of The John F. Kennedy Center
for the Performing Arts in Washington, D.C., he
wrote: 'The Mass is also an extremely dramatic
event in itself it even suggests a theater work.'
Premiered on September 8, 1971, with additional words by Stephen Schwartz of
Godspell fame, Mass is a remarkable, visionary work with a kaleidoscope of musical
styles that touches on themes of political protest, existential crisis and religious
faith lost and found. Featuring Marin Alsop conducting the Baltimore Symphony
Orchestra and soloist Jubilant Sykes.