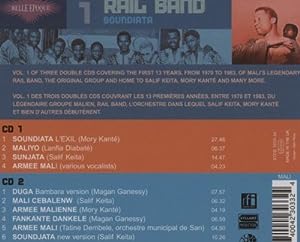 $14.80
As of 2021-09-13 08:18:55 UTC (more info)
Not Available - stock arriving soon
Buy Now from Amazon
Product prices and availability are accurate as of 2021-09-13 08:18:55 UTC and are subject to change. Any price and availability information displayed on http://www.amazon.com/ at the time of purchase will apply to the purchase of this product.
See All Product Reviews

The early years, in the Rail Band's case, were not a fledgling period of false starts and awkward first steps. In 1970 a hotel adjacent to the central railway terminal in Bamako, Mali, hired the best musicians in the country to entertain guests, and with the charismatic young Salif Keita as lead singer the band caused an immediate sensation in Bamako and was soon famous throughout Mali and neighboring countries. Its dynamic fusion of jeliya and other traditional Malian forms with rock, blues and Latin music was audacious and brilliant. Its impact is still felt today.

Keita went on to start his own group in 1972, but by then Mory Kanté, another talented singer (and balafon player) had joined the Rail Band. Around the same time, a new guitarist, Djelimady Tounkara, also came on board. Tounkara now leads the Super Rail Band, which still plays at the train-station hotel on special occasions when it's not touring the world, and he is widely recognized as one of the greatest guitarists of our time. Salif Keita and Mory Kanté endure among the most highly acclaimed African artists in the world.

This three-volume retrospective, Belle Epoque, is organized thematically, not chronologically. Each 2-CD volume includes recordings from the historic 14-year span of 1970 to 1983.

Picture on the Wall