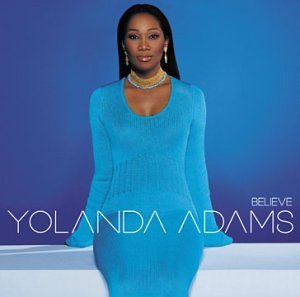 $4.96
As of 2022-11-20 12:16:06 UTC (more info)
Not Available - stock arriving soon
Buy Now from Amazon
Product prices and availability are accurate as of 2022-11-20 12:16:06 UTC and are subject to change. Any price and availability information displayed on http://www.amazon.com/ at the time of purchase will apply to the purchase of this product.
See All Product Reviews

With the 1999 release of her Elektra debut Mountain High...Valley Low, Yolanda Adams became an unqualified Gospel superstar. The album featured the smash hit "Open My Heart" and spent much of the year at #1 on Billboard Magazine's Gospel and Contemporary Christian Charts, eventually selling over a million copies and making Yolanda the best selling Gospel artist of 2000. She was honored with the 2000 Grammy Award for Best Contemporary Soul Gospel Album, plus five Stellar Awards, a Soul Train Lady Of Soul Award, three Dove Awards and an NAACP Image Award. Her highly anticipated new Elektra album Believe - her first non-seasonal studio album since Mountain High...Valley Low - is another stunning statement of faith, a sparkling collection that highlights her soaring voice.

Yolanda Adams has enjoyed a meteoric rise up the charts since her sparkling 1999 debut, Mountain High, Valley Low. A Christmas and live album later, she's back with her most polished and deliberate release yet. Adams calls on friends Shep Crawford, Jimmy Jam and Terry Lewis, and Kevin Bond to again produce a silky-smooth backdrop for her commanding vocal presence. While the topical matter on Believe seems geared toward a secular market, there are gospel strains on the tracks "Only If God Says Yes" and "Thank You." Most of the beats center around the radio hits "I Gotta Believe" and "Never Give Up," inspirational ballads built to showcase Adams's beautiful voice. There's some edgy funk to boot, with Elektra label mate Karen Clark-Sheard on "Fo' Sho'." Overall, the crossover appeal of Believe seems destined to make Adams's star shine even brighter. --Michael Lyttle

I Can Only Imagine [Accompaniment/Perfor...