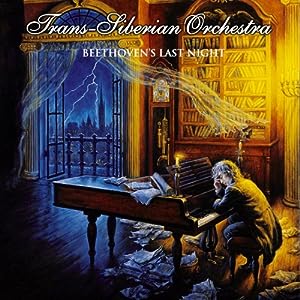 $11.55
As of 2022-11-30 21:48:04 UTC (more info)
Not Available - stock arriving soon
Buy Now from Amazon
Product prices and availability are accurate as of 2022-11-30 21:48:04 UTC and are subject to change. Any price and availability information displayed on http://www.amazon.com/ at the time of purchase will apply to the purchase of this product.
See All Product Reviews

Trans-Siberian Orchestra's first two recordings, a pair of late-'90s Christmas albums, hinted that some day TSO might evolve into a latter-day ELO or even an ELP. Instead, this overwrought concept album shares more common ground with ALW (Andrew Lloyd Webber) or Meat Loaf. TSO, in fact, aims to retrace a path once traveled by producer Jim Steinman, the mastermind behind the theatrical, over-the-top rock opuses that briefly transformed Mr. Loaf and Bonnie Tyler ("Total Eclipse of the Heart") into mass-audience favorites. TSO ringmaster Paul O'Neill (once a guitarist in Broadway productions of Jesus Christ Superstar and Hair) here ditches the holiday themes and instead scores a simple-minded fairy tale (whose text spans a 32-page CD booklet) that involves Beethoven's soul, the devil, and an imaginary Symphony No. 10. Too often, the music is the servant of the project's thin plot, and the rock-classical instrumental bravura that initially attracted public attention to TSO (at times, the group sounds like a symphonic Boston) is obscured by overheated vocal rantings. Meanwhile, the guitar-driven rendering of Beethoven's Ninth Symphony ("Requiem") is mundane. Yet, one vocal track, "After the Fall" with singer Patti Russo, jumps off the record as a Tyler-esque knockout, raging with emotion and melodic luster. It doesn't save the album, but it helps. --Terry Wood

Christmas With The Chipmunks [LP]