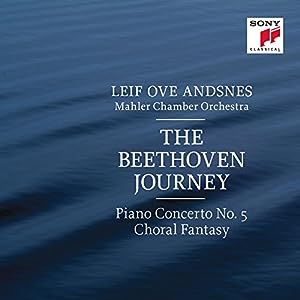 $13.26
As of 2021-04-16 17:49:00 UTC (more info)
Not Available - stock arriving soon
Buy Now from Amazon
Product prices and availability are accurate as of 2021-04-16 17:49:00 UTC and are subject to change. Any price and availability information displayed on http://www.amazon.com/ at the time of purchase will apply to the purchase of this product.
See All Product Reviews

Celebrated Norwegian pianist, and 2013 Gramophone Hall of Fame inductee, Leif Ove Andsnes completes his exploration of Beethoven's complete piano concertos with The Beethoven Journey: Piano Concerto No. 5 Emperor. Like the first two titles in the series, Piano Concertos Nos. 1 & 2 - which won the iTunes Best Instrumental Album of 2012 - and Piano Concertos Nos. 2 & 4, the new album was recorded with the Mahler Chamber Orchestra and directed from the keyboard by the pianist himself.

As with the two previous albums, Piano Concerto No. 5 was recorded live at the Prague Spring Festival earlier this year. The Beethoven Journey: Piano Concerto No. 5 is timed to coincide with Andsnes upcoming all-Beethoven performances in San Francisco in September, Los Angeles in October and New York City in February 2015.

The New York Times has called Leif Ove Andsnes a pianist of magisterial elegance, power and insight. With his commanding technique and searching interpretations, Andsnes has won acclaim worldwide playing in the world's leading concert halls and with the world's leading orchestras. He has been nominated for eight Grammy Awards®, five Gramophone Awards and was recently inducted into the Gramophone Hall of Fame, prompting the Wall Street Journal to call him one of the most gifted musicians of his generation.