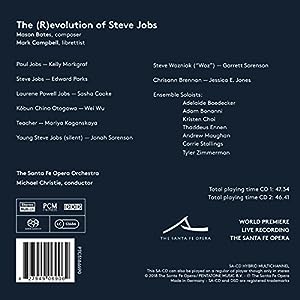 $23.06
As of 2021-07-13 04:27:14 UTC (more info)
Not Available - stock arriving soon
Buy Now from Amazon
Product prices and availability are accurate as of 2021-07-13 04:27:14 UTC and are subject to change. Any price and availability information displayed on http://www.amazon.com/ at the time of purchase will apply to the purchase of this product.
See All Product Reviews

In their astounding new opera The (R)evolution of Steve Job, composer Mason Bates and librettist Mark Campbell explore the spiritual evolution of one of the most influential men of modern times as he creates a revolutionary new world of technological empowerment, then discovers a larger world within himself. Like Steve Jobs, composer Mason Bates is an innovator whose creativity breaks through boundaries, combining traditional orchestration with electronics in ways that have made him one of the most sought-after and widely programmed composers in the United States. In The (R)evolution of Steve Jobs, Bates and Campbell give us an alternative and intimate perspective of a public life, examining the people and experiences that shaped Steve Jobs: his father, his Buddhist practice, his rise and fall as an executive, and finally his marriage to the woman who showed him the power of human connection.