Bat out of Hell II: Back into Hell 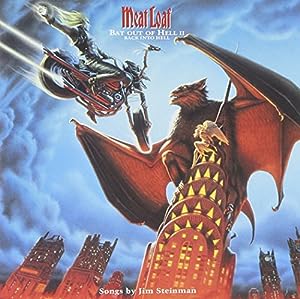 Bat out of Hell II: Back into Hell

$5.99
As of 2021-07-27 13:17:39 UTC (more info)
Not Available - stock arriving soon
Buy Now from Amazon
Product prices and availability are accurate as of 2021-07-27 13:17:39 UTC and are subject to change. Any price and availability information displayed on http://www.amazon.com/ at the time of purchase will apply to the purchase of this product.
See All Product Reviews

At a certain point, bad taste and bombast becomes so excessive and so grandiose that they're no longer an easily dismissed irritation but an astonishing monument to the warped imagination. Such a monument is Meat Loaf's Bat Out of Hell II: Back Into Hell, the long-delayed sequel to 1977's Bat Out of Hell. Once again songwriter/producer Jim Steinman has isolated high-school parking-lot aphorisms and inflated them to Wagner-on-Broadway proportions, casting Mr. Loaf as a heavy-metal Ezio Pinza. Typical of the album's strategy is its big hit single, "I'd Do Anything for Love (But I Won't Do That)." Steinman piles on the guitars, drums, synthesizers, and choral voices as if he were Phil Spector producing Kiss playing the Who songbook. The rest of the album tackles the themes of teenage lust, frustration, and rock & roll fantasies in similar fashion. It's somehow beside the point to complain about the puerile lyrics, the leaden rhythms, the derivative melodies, the histrionic vocals, or the overblown arrangements. Steinman knows how to push his audience's buttons, and with Meat Loaf's help, he hits those buttons with a sledgehammer. --Geoffrey Himes

BAT OUT OF HELL II: BACK INTO HELL MUSIC

Blows Against the Empire