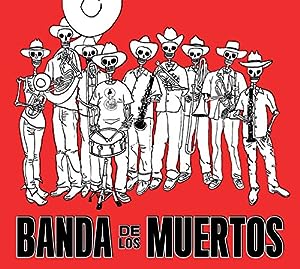 $10.97
As of 2021-06-19 18:08:51 UTC (more info)
Not Available - stock arriving soon
Buy Now from Amazon
Product prices and availability are accurate as of 2021-06-19 18:08:51 UTC and are subject to change. Any price and availability information displayed on http://www.amazon.com/ at the time of purchase will apply to the purchase of this product.
See All Product Reviews

The debut release from Banda de Los Muertos, co-led by multi-instrumentalists Oscar Noriega and Jacob Garchik, features some of New York s finest jazz musicians, including Chris Speed, Jim Black, Curtis Hasselbring and Brian Drye, as well as Mexican singer Mireya Ramos. Their music though is a rootsy tribute to
the music of choice of Mexican immigrants, who make up a good part of their fan base.

Noriega grew up in Tucson, AZ playing in a band with his four brothers whose repertoire included ranchera, boleros, cumbia and other classic Mexican tunes. He went on to study music at NEC, in Boston, and fast forward twenty years he has re-connected the music of his youth. Garchik, a voraciously curious musician (who also works as an arranger for the Kronos Quartet) developed an obsession for Mexcian Banda music and its intricate brass arrangements. Together the respected composers have formed NYC's best (and only) Mexican banda that includes fans such as Banda el Recodo, the mother of all of Mexican Brass Bands.

only $3.93
Not Available
View Add to Cart

Wake Up And Smell The Coffee