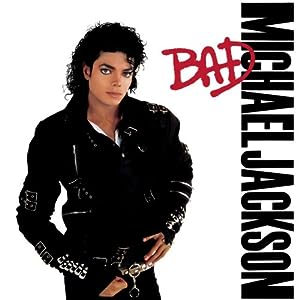 $4.95
As of 2021-09-19 05:54:42 UTC (more info)
Not Available - stock arriving soon
Buy Now from Amazon
Product prices and availability are accurate as of 2021-09-19 05:54:42 UTC and are subject to change. Any price and availability information displayed on http://www.amazon.com/ at the time of purchase will apply to the purchase of this product.
See All Product Reviews

How do you follow-up the biggest album of all-time? That was MJ's challenge with 1987's Bad . While failing to scale the sales heights of Thriller , Bad boasted a record-breaking 5 #1 singles. This 2001 special edition adds three unreleased tracks, plus interviews with producer Quincy Jones.

"We wanted a tough album," producer Quincy Jones recalls in a bonus interview on this special edition of Bad. Though the 1987 blockbuster would appear to be Michael Jackson's most personal statement to date--9 of its 11 cuts were written solely by him--its appeal also rested more on craft than the idiosyncratic art of Thriller and Off the Wall. At the same time, most of Bad has aged well in spite of its digital brittleness and MIDI treatments of gems like Jimmy Smith's organ solo on the title track. While the third best of his first three Epic solo discs, Bad carries a lot of what people love about Jackson's music. This disc also benefits from two fine outtakes, the exciting, uptempo "Streetwalker" and the Carpenters homage "Fly Away." Either could easily have extended the record's run of hit singles. --Rickey Wright