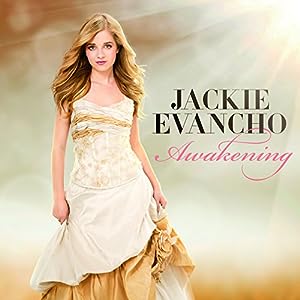 $2.63
As of 2022-11-27 22:57:02 UTC (more info)
Not Available - stock arriving soon
Buy Now from Amazon
Product prices and availability are accurate as of 2022-11-27 22:57:02 UTC and are subject to change. Any price and availability information displayed on http://www.amazon.com/ at the time of purchase will apply to the purchase of this product.
See All Product Reviews

The new album from the Platinum-selling teenage vocal sensation

Fourteen-year-old vocal sensation Jackie Evancho's new album, "Awakening," signals some new directions for the platinum-selling artist. Without foregoing the beautiful and lush classical-crossover compositions for which Evancho has became famous, she also extends her stylistic reach with contemporary material on songs such as the haunting folk song "The Rains of Castamere" from HBO's hit series "Game of Thrones." Jackie also takes a bigger step forward on her version of U2's "With or Without You," and also sings a few original songs including the anthem "Take Me There" and "Open Fields of Grace," which were written especially for her. Produced by Nick Patrick, "Awakening" also features the ethereal ballad "Memories" by the Dutch band, Within Temptation, and the popular classic "Think of Me" from Andrew Lloyd Webber's Phantom of the Opera. Rounding out the album are the classical standards "Ave Maria" and Rachmaninoff's "Vocalise." Says Evancho about "Awakening," "I feel that my singing style has matured, and it's easier for me to feel comfortable onstage." Jackie will be filming a new PBS pledge special that will air nationally in December and will be touring throughout the U.S. starting in November 2014.

Jackie Evancho dazzled American television audiences at age ten gaining global recognition with her stunning debut on NBC's "America's Got Talent." Since then, she has released a string of successful albums, acted in Robert Redford's "The Company You Keep" alongside Susan Sarandon and performed for President and Mrs. Obama at the National Christmas Tree Lighting in Washington D.C. Earlier this year, Jackie performed at the PBS Memorial Day Concert and also at the prestigious Songwriters Hall of Fame induction ceremony. Throughout the summer Jackie is doing a special promotion with tween clothing store Justice. She will be featured in their summer catalogue and the video for an exclusive song she recorded for the chain, "Go Time," will be featured on their web site and on screens in all 900 Justice stores nationwide.