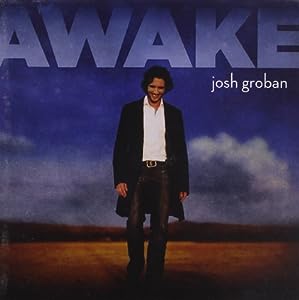 $4.99
As of 2022-09-29 00:41:24 UTC (more info)
Not Available - stock arriving soon
Buy Now from Amazon
Product prices and availability are accurate as of 2022-09-29 00:41:24 UTC and are subject to change. Any price and availability information displayed on http://www.amazon.com/ at the time of purchase will apply to the purchase of this product.
See All Product Reviews

Josh Groban is making it hard for anybody who can't say "classical crossover" without smirking to maintain an acceptable level of snobbery. Awake, his third studio disc and arguably his most personal--he co-wrote four tracks and favors his native English over Italian--boasts as many bold names as any tricked-out hip-hop disc: Dave Matthews, Ladysmith Black Mambazo, Imogen Heap, and Herbie Hancock contribute in various capacities, and a slew of behind-the-scenes collaborators best known for their work in mainstream pop circles deepen the dimensions of a style widely considered claustrophobic. For all the studio doors that got opened to create Awake, though, Groban's signature sound never once slipped out to take the air; "the voice"--that hypnotic, spun-silk wonder of an instrument--is as concentrated as ever, and Awake, in addition to showing off its many splendors, serves as a vehicle for parading its versatility around. While "Un Giorno Per Noi," the deeply romantic theme to the 1968 film Romeo E Giulietta, delivers the Groban that fueled the sale of 16 million previous discs to soft-hearted fans, "Machine," with Hancock, gives up a new form of funk: dignified, classy, and surprisingly unstiff. --Tammy La Gorce