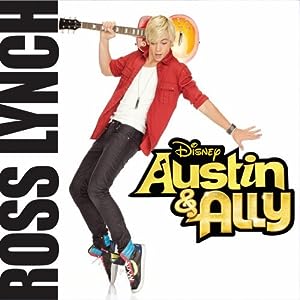 $4.99
As of 2021-04-18 02:54:21 UTC (more info)
Not Available - stock arriving soon
Buy Now from Amazon
Product prices and availability are accurate as of 2021-04-18 02:54:21 UTC and are subject to change. Any price and availability information displayed on http://www.amazon.com/ at the time of purchase will apply to the purchase of this product.
See All Product Reviews

Disney Channel's popular music-driven series "Austin & Ally" will release its first soundtrack album. The 14-song set will boast 12 tracks from the show's co-star Ross Lynch, with two bonus cuts from Lynch's pop group R5.
The album's current single, Lynch's "Heard It On the Radio," is off to a fast start with copious views on YouTube since its premiere on July 17, while the single takes a bow at No. 6 on Billboard's Kid Digital Songs chart.
"It's really amazing," 16-year old Lynch tells Billboard of "Heard It On the Radio's" successful clip. "It's incredible to have all that hard work that you put into something turn out so great. I love the video."
"Austin & Ally" is currently in its second season on Disney Channel, and airs Sunday nights at 8 PM. The series premiered in December 2011 and co-stars Laura Marano, Raini Rodriguez and Calum Worthy. The show focuses on the unlikely duo of extroverted singer/musician Austin (Lynch) and shy-but-smart songwriter Ally (Marano).

Before breaking through with "Austin & Ally," Lynch had been seen in nearly 20 national commercials and was featured in music videos for Disney's own "Hannah Montana" and the long-running "Kidz Bop" series. TV fame runs in the family -- Lynch's cousins are Derek Hough (ABC TV's "Dancing With the Stars") and Julianne Hough ("Dancing. . .," and the films "Footloose" and "Rock of Ages"). Lynch's brother -- and a member of R5 -- is Riker Lynch, who plays Dalton Academy Warbler "Jeff" on Fox TV's "Glee."
Aside from "Austin & Ally," Ross Lynch is busy with his own group, R5. The quintet consists of four Lynch siblings (brothers Ross, Riker, Rocky and sister Rydel) along with the unrelated drummer Ellington Ratliff.
The band is slated to release its Hollywood Records debut EP in early 2013, followed by a full-length album later in the year. In the meantime, two R5 cuts will appear on the "Austin & Ally" soundtrack: "Crazy 4 U" and "What Do I Have To Do?"
Ross Lynch says that they are "still writing and producing tracks" for the upcoming releases, and that they "have a lot of amazing songs already written."
"Our style is very pop/rock," Lynch continues, "but a little more guitar driven with some really great melodies. My brothers are great writers, so it's getting pretty exciting to see it all come together."