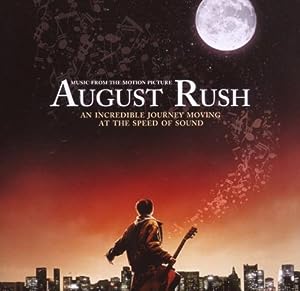 $4.41
As of 2021-07-16 16:50:28 UTC (more info)
Not Available - stock arriving soon
Buy Now from Amazon
Product prices and availability are accurate as of 2021-07-16 16:50:28 UTC and are subject to change. Any price and availability information displayed on http://www.amazon.com/ at the time of purchase will apply to the purchase of this product.
See All Product Reviews

August Rush tells the story of a charismatic young Irish guitarist (Jonathan Rhys Meyers) and a sheltered young cellist (Keri Russell) who have a chance encounter one magical night above New York's Washington Square, but are soon torn apart, leaving in their wake an infant, August Rush, orphaned by circumstance. Now performing on the streets of New York and cared for by a mysterious stranger (Robin Williams), August (Freddie Highmore) uses his remarkable musical talent to seek the parents from whom he was separated at birth. Film Stars Robin Williams, Freddie Highmore, Keri Russell, Jonathan Rhys-Meyers, Terrance Howard, and Mykelti Williamson.

Who knew Jonathan Rhys Meyers had such an aching, lovely croon? In August Rush, he supplies his own vocals in the role of an Irish indie-rock singer, and it's a testament to his skill that he doesn't embarrass himself on Van Morrison's "Moondance." (He's even better on Lucas Reynolds' "Something Inside.") This is fairly representative of this CD's flavor: thoughtful, adult but not bland--typically, you hear a lot of cello throughout. John Ondrasik, stepping out from his Five for Fighting persona, wrote new material, though the best song, "King of the Earth," is an unreleased one by his main project that boasts superb, elegant production by Bill Bottrell. Intriguingly, guitar virtuoso Kaki King is the hand double for Freddie Highmore, who plays the film's child prodigy. Her two instrumentals, "Bari Improv" and "Ritual Dance," are treats for lovers of inventive acoustic playing, who should also enjoy the self-explanatory "Dueling Guitars." John Legend sounds aching on "Someday," though the cover of "God Bless the Child," by Chris Botti and Paula Cole, feels a little lite. --Elisabeth Vincentelli