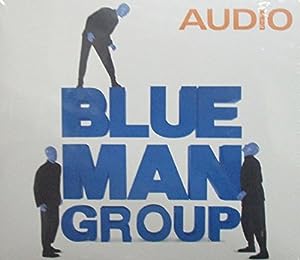 $8.29
As of 2022-06-16 01:00:23 UTC (more info)
Not Available - stock arriving soon
Buy Now from Amazon
Product prices and availability are accurate as of 2022-06-16 01:00:23 UTC and are subject to change. Any price and availability information displayed on http://www.amazon.com/ at the time of purchase will apply to the purchase of this product.
See All Product Reviews

It's hard to believe that this is the debut CD created by award-winning performance-art sensations the Blue Man Group, whose off-the-wall and high-tech, highly percussive show has been an off-Broadway hit since the beginning of its uninterrupted run in 1991. This CD is not a soundtrack; while some pieces appear in the show, they are presented here with extra instruments, performers, and recently developed instruments. In addition to making abstract paintings by pouring paint onto kettledrums then bashing on them until the color pours onto an awaiting canvas, the Blue Man Group make their own instruments out of unexpected, often very simple materials. Creations used to make this record include air poles, the big drum, the PVC instrument, the backpack tubulum, and the drum wall (no, David van Tieghem is not a member of the group). Those homemade instruments notwithstanding (which are most striking visually anyway), the heavily rhythmic nature of the music, combined with the guitar as a focal element, reminds one of early-to-mid-1980s art-rock. The opening salvo--a two-minute number--starts off subtle and pleasing enough, with slowly building layers of percussive sound and overlapping soundtrack-y guitar lines vaguely reminiscent of Ennio Morricone, the great soundtrack composer that everyone rips off. The entire disc will highly satisfy the faithful and serve as intriguing background music for everyone else. --Mike McGonigal

Write Me a Letter - Radio Broadcast 1973